Today I'll present Interframe Spaces (IFS). What is an IFS? The IFS is a quiet period that APs and STAs must wait before any 802.11 frame transmission.
There is several types of IFS, and starting form the shortest to longest, they are:

RIFS - Reduced Interframe Space
Used only by 802.11n devices using MIMO; it proceeds data frames, and
is used between frames of a Contention Free Burst, used when block
acknowledgements are enabled. The length is always 2 microseconds.

SIFS - Short Interframe Space
Used to determine the length of other IFSs. Commonly used IFS,
whenever arbitration has been completed.
Set to 10 micro seconds (b/g/n in 2.4GHz) and 16 mocroseconds (a/n/ac
in 5GHz)

PIFS - PCF Interframe Space
Used only with Channel Switch Announcement frame,
which is one of the action frames from 802.11h. Equals to one slot time
plus one SIFS.

AIFS - Arbitration Interframe Space
Used by APs and STAs that support 802.11e QoS. Used before the
arbitration process. It's not a static value, it's value changes based on
the priority level of the data, as based on 802.11e QoS:
Voice & Video - 2 slot times
Best Effort - 3 slot times
Background - 7 slot times

EIFS - Extended Interframe Space
Used to give APs and STAs a chance to retransmit after a failed frame
reception. When APs or STAs hear a corrupt frame on the channel (FCS
fails), they stay quiet for an EIFS. Set to SIFS plus DIFS plus the time it
takes an Ack frame to transmit:
364 microseconds - b/g/n (2.4GHz, DSSS)
160 microseconds - a/n (5GHz), g/n (2.4GHz, OFDM)
at Tuesday, May 26, 2015 No comments:

Management frames form the skeleton of wireless networks. They allow wireless devices to form a network and manage the connection.

Management frames always have a standard 24-byte-long MAC header with three addresses, followed by a body of variable size

Information fields are fixed-length mandatory fields in the body of a management frame.
Information elements are variable in length and are optional.

Management frames are always limited to the cell space; they are never relayed through an access point to the DS, from the DS,
or from a station to another station. For this reason, management frames sent by access points always have the To DS and From DS
fields set to 0.

When 802.11n is in use, the header is extended to show the HT Control section.

Management frames are of type 00, and the many different subtypes:

All of the above subtypes will be discussed in the following posts.
at Wednesday, April 01, 2015 No comments:

As part of my preparation for CWAP exam, in the next couple of posts I will be discussing frames and frame formats.

A generic frame has the following format:

MAC Header consist of several fields, not all of them are always present, though.

It's a 2 byte field that is always present, it contains the following fields:

This is a 2 byte field, the contents of this field vary with frame type and subtype, or whether the STA supports QoS capabilities:
MAC Layer Addressing

Used by a receiving station to eliminate duplicate received frames and to reassemble fragments.

The QoS Control field is a 16-bit field that identifies the Access Category to which the frame belongs as well as various other QoS-related, A-MSDU related, and mesh-related information about the frame that varies by frame type, subtype, and type of transmitting STA


There's much more details to this topic, if anyone is interested in diving deeper, an 802.11 standard would be a recommended resource.

I passed CWDP exam, time to prepare for CWAP now.
at Tuesday, November 18, 2014 No comments:

One of the ways to improve overall network performance is to disable support for lower speed rates. Management frames are transmitted on the lowest basic speed rate, by default this rate is 1 Mbps.

One of the implications of sending frames on low speed rates is the fact that in free space, 1 Mbps signal can be received 14 times farther than 54 Mbps signal.
By changing the lowest basic rate from 1 Mbps to 5.5 or higher we can decrease the effective BSS (Basic Service Set) area that can be serving clients. It doesn't mean the coverage has been decreased, this is achieved by manipulating the Tx power of the access point (this technique will be discussed in a separate post).

The important fact is that by disabling the lower speeds on the AP (or wireless lan controller) we only prevent the AP/WLC from sending the frames on these speeds. What that means is that when a client sends a broadcast probe request (always on 1 Mbps) the AP will hear it, but it will respond back to the client with a probe response on it's lowest basic rate. The implication of it, is if the client can't operate on this speed it won't be able to connect to the network, for example if we disable speeds 1, 2, 5.5 and 11 Mbps, effectively we will prevent 802.11b clients from connecting to the network.

Let's examine another scenario, let's take a client that has already associated to the network, with a 5.5 Mbps set as a basic speed rate, it currently operates at 24 Mbps and is moving away from the AP. At some point, along with signal quality degrading, it will start switching down to a rate with less demanding modulation, to a point when it will have to switch to 2 Mbps rate (operating with QPSK modulation). At this stage, since the AP is not supporting this rate, the client will be kicked of the network.


Here's an example of how to disable speeds 1 and 2 Mbps on Cisco controller: 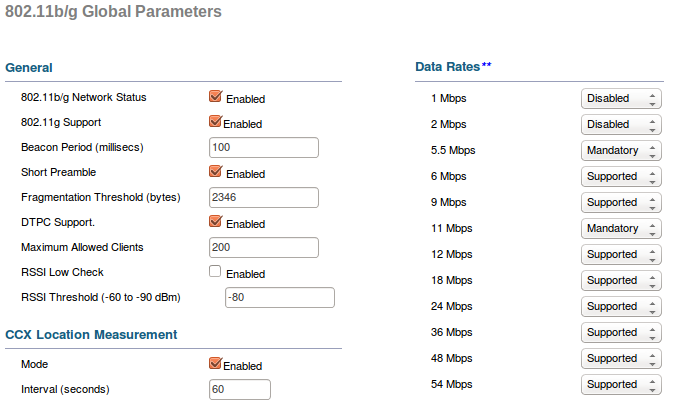 By changing the mandatory speed rate we also decreasing the overall overhead of the wireless network. Every AP sends a beacon frame, advertising it's presence and capabilities, this frame is a broadcast frame, sent by default at about 100 ms interval.
Because this frame is a broadcast frame, it is sent at the lowest basic rate (1 Mbps by default). By disabling lower speeds, we are forcing the beacon frames to be sent at higher data rates, and at the same time decreasing protocol overhead and improving the overall performance of the wireless network.

Here's an example of how disabling 1 and 2 Mbps speed rates decreases the protocol overhead. For a network with 4 SSIDs per AP (where each AP is within a range of three other APs on the same channel) with default basic rate of 1 Mbps, the overhead is 38.70%. When speeds of 1 and 2 Mbps are disabled, leaving 5.5 Mbps as the lowest basic rate, the overhead is reduced to 8.42%.

For overhead calculations I used SSID overhead calculator, an incredibly useful tool created by Andrew von Nagy, that can be found on his website www.revolutionwifi.net
at Tuesday, November 18, 2014 No comments:

These above are checks and balances that work together at the same time to ensure that only one 802.11 radio is transmitting on the half-duplex medium.

IFS is a period of time that exists between transmissions of wireless frames
There are 6 types of IFS (from shortest to longest):

Only ACK frames, data frames, and CTS frames may follow a SIFS.

Two most common IFS are: SIFS and DIFS

Interframe spaces are all about what type of 802.11 traffic is allowed next.

A value form 0 to 32,767. The value of the Duration/ID field indicates how long the RF medium will be busy before another station can contend for the medium.
It's a field in the MAC header of an 802.11 frame.

The first step that an 802.11 CSMA/CA device needs to do to begin transmitting is to perform a carrier sense. This is a check to see whether the medium is busy.

Uses a timer mechanism known as the Network Allocation Vector (NAV).
The NAV timer maintains a prediction of future traffic on the medium based on Duration value seen in a previous frame transmission.

The listening station will use the NAV as a countdown timer, knowing that the RF medium should be busy until the countdown reaches 0.

When an 802.11 radio is not transmitting, it is listening.

It has two purposes:

The medium must be clear before a station can transmit.

The station selects a random back-off value. The value is chosen from range of 0 to the initial contention window value. This value is then multiplied by slot time (it differs among different spread spectrum techniques). This back-off timer is used before a station can transmit.
at Tuesday, December 31, 2013 No comments: